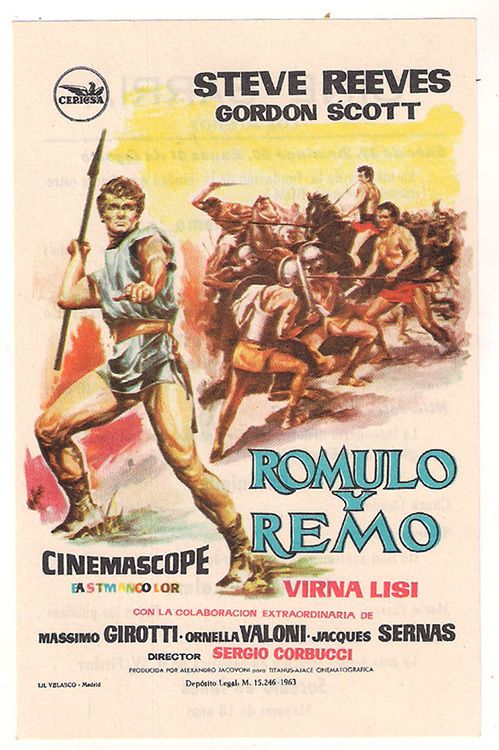 In order to protect her twin infants from the wrath of a King, a Vestal priestess (Laura Solari) sends her babies down a river on a small raft. The infants' cries attract a she wolf who carries them back to her lair where she nurses them along with her other cubs. They are found by a shepherd who adopts them as his own and names them Romulus and Remus who will eventually built a city that will be the foundation of the Roman Empire. As directed by Sergio Corbucci (DJANGO) and with a screenplay that includes Sergio Leone among its writers, the narrative is much stronger than most Peplum movies. The brothers who founded Rome are given a Cain and Abel backstory which provides some needed internal conflict. The battle scenes are okay but its the well done burning volcano sequence that's the film's visual highpoint. It's not the kind of film where acting matters much but Gordon Scott (Remus as Cain) proves to be a better actor than Steve Reeves (Romulus as Abel) who doesn't seem to be able to even smile believably. The solid score is by Piero Piccioni and the CinemaScope lensing by Enzo Barboni. With Virna Lisi (looking stunning) as Reeves' love interest, Jacques Sernas (HELEN OF TROY), Massimo Girotti and Ornella Vanoni.

Posted by The CinemaScope Cat at 9:10 PM