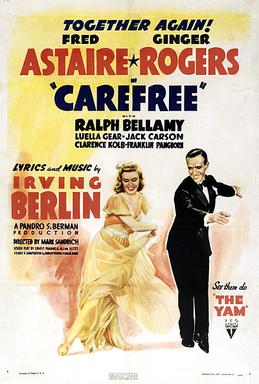 When his fiancee (Ginger Rogers) seems unable to commit to marriage, her beau (Ralph Bellamy) asks his psychiatrist friend (Fred Astaire) to get to the root of her fear of commitment. In the process, however, Rogers falls for Astaire instead. Generally considered one of the lesser Astaire & Rogers vehicles, CAREFREE is a surprisingly enjoyable if minor screwball comedy. Parts of it are marred by Rogers' tiresome acting like a little child act that she pushed to annoying heights in MAJOR AND THE MINOR and MONKEY BUSINESS but it works moderately well even without the songs and dances. This is, however, an Astaire & Rogers musical and in that respect, it is disappointing. The Irving Berlin songs (save the lovely Change Partners) are a humdrum lot though The Yam production number is spirited and fun. Needless to say, when Astaire and Rogers dance together, magic happens. Directed by Mark Sandrich. With Jack Carson, Luella Gear, Franklin Pangborn and Hattie McDaniel, whose reading of the line "Mayonnaise!" is priceless. The film is most memorable in the Astaire & Rogers canon because it's the only film in which they have a long, passionate kiss as opposed to the usual pecks.
Posted by The CinemaScope Cat at 12:47 PM