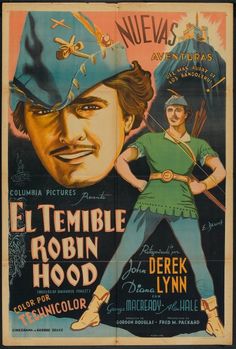 King John (George Macready) enforces unfair taxation upon his subjects in order to pay an army of Flemish mercenaries, headed by the Count of Flanders (Lowell Gilmore), to keep him in power. But Robin, the Earl of Huntington (John Derek) and his band of merrie men foil his plans by guerrilla tactics while they hide in the forests of Sherwood. Directed by that most generic of film directors, Gordon Douglas (who would direct ROBIN AND THE 7 HOODS 14 years later), this is a by the numbers rendition of the Robin Hood tale. This time it's tied in to the historical signing of the Magna Carta. It's fairly humorless and without much wit or panache. The Technicolor cinematography by Charles Lawton Jr. (LADY FROM SHANGHAI) is vivid and velvety and the costumes are handsome especially the gowns Jean Louis designed for Diana Lynn as Lady Marianne. For a swashbuckler, there's precious little swashbuckling though their is a nice duel at the end between Derek and Gilmore. With Alan Hale recreating Little John for the last time (he played the same role in 1922 opposite Douglas Fairbanks and 1938 opposite Errol Flynn), Paul Cavanagh and John Dehner.

Posted by The CinemaScope Cat at 11:15 PM